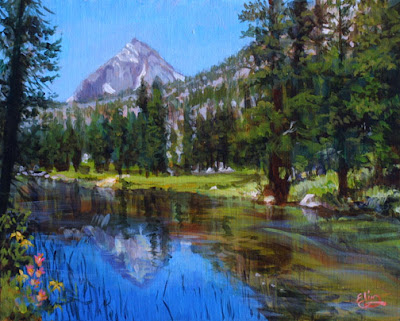 I LOVE last-minute commissions! I am so pleased that I can deliver a painting in a week or less when other artists take months. It has been especially wonderful this year, as my contact list and word of mouth has brought some wonderful folks to my email "door" with requests for paintings for gift giving.
Here is an example of the one I just shipped--a 16 x 20 acrylic of a place that is so very special to the person receiving the present--his favorite place for camping and in the high country with that distinct peak. His wife sent me images, and I pulled the view together (and you know how much I love to paint water!). She was very pleased, and so am I.

And two paintings as last minute Christmas gifts were sold from my ebay store, one shipped to arrive Tuesday, and another to be hand delivered by me this weekend.

So my holidays are busy and full of the real pleasure of bringing visual joy to so many people, while doing what I love, (and must do) to be who I am.

To all my collectors and friends, I wish you a very safe and loving holiday season filled with your most treasured wishes. For me, it will be a quiet season, reflecting on all the wonderful friends I have made through my artwork. Well, as quiet as it can be with two new puppies!
Here's an image of them when it truly IS quiet.... 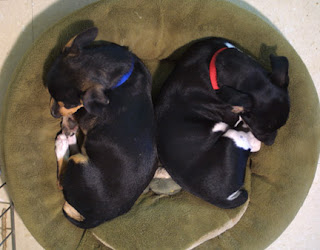 You can see my entire blog here. 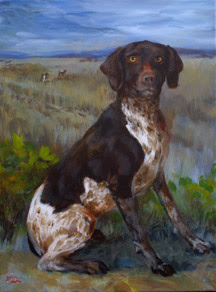 A marathon couple of days in the studio this week... two commissions to finish up, and this is the first. The second is done, too, but I'm waiting for feedback from the folks before posting it.

This is the finished 24 x 18 inch acrylic portrait of "Robi" and I am going to quote for you some of the writings that her former owner wrote:
This pup was singularly responsible for bringing my dad and I back together. Dogs work a sort of magic with him--soften him up. Sounds a bit silly I guess, but my dad accepted the pup and put our troubles behind him. At any rate, his young dog and my young pup became fast friends, so close, so inseparable in fact that even though Robi was my dog, she was happiest with Tarn and my dad. I could never have moved her to Southern California--it would have been unfair to all three.

She was, without a doubt, the oddest dog we've ever had. Until about four years of age, she would not gain much weight. She grew and always had an incredibly shiny coat and healthy gleam to her eye, but her ribs and hip bones always stuck out (despite eating large quantities of food). She was very active (not hyper or yippy or a bit crazy--none of our shorthairs have been as they are sterotyped).

Robi was our only digger. She did dig a few holes in the lawn, but stopped that quickly on her own. Instead, she was prone to burrying things in the couch. The two dogs got a selection of milk bones and pig ears in the evening time. Robi would take each one and run off to one of the couches, where she would wedge it down between the cushions with her nose. If there were blankets in the way, she'd dig at them with her paws until she could shove the treat where she wanted it. She'd then dig up her little hidden treasures later that evening or the next day for a snack.

Robi was a good hunter with a good nose. She was keen to retrieve and a good swimmer. Although, she was always far more content to hunt very close to my dad, while Tarn would range out farther and cover a lot more ground. Tarn was often the first dog to find a bird. Robi would honor Tarn's point every time. She did this instinctively without ever being trained or taught to do so.

In terms of dimensions, Robi was small for a shorthair. She was about 35-40 pounds at her normal weight and around 28" at her shoulder. She often wore a guilty look, though she was very rarely in trouble.

In her last year she had moved with my dad and Tarn to the Isle of Man and then to Alaska, my dad's permanent residence. In August, my dad was entertaining some company that wanted to do a lot of salmon fishing. On a scouting expedition, my dad let both dogs out on the side of a country road. Both dogs have been around their fare share of traffic and cars--they are traffic safe. It was one of those fluke things where Robi just got out on the wrong side at the wrong time and a car just happened to be right there, coming out of a blind turn. The car hit her without having time to break. My dad was just crushed. He performed CPR on her for 10 minutes, but to no avail--she passed away quickly from massive internal injuries. (End of quote)

I'm sure you can see why I had to paint Robi. Stories like this one make my painting journey such a poignant one. The painting is now in the hands of Summer and Shawn, and it will travel north to Alaska next week, as a present to his dad. Here's a photograph of the painting when they picked it up today. Yes, these two also shoe my horse! 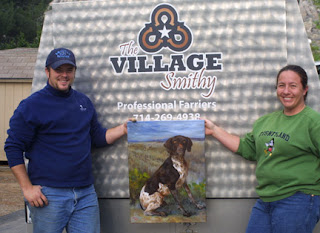 You can see my entire blog here.

If you need to email me directly, please click here.
Posted by Unknown at 11:48 PM No comments:

Elin's DVDs on her Color System

DVDs and the Color Flash Cards now available from her web site! Click the image.

Here are similar works for you to enjoy: